A Duel and a Giveaway, Oh My!

I'm sooo excited to have Chrys Fey here today with a guest post for her new release, Seismic Crimes and her already released companion novel, Hurricane Crimes! Such a clever way to offset the two novels against each with a duel..

When it was time for me to write the opening sentence of Seismic Crimes, I purposely made the statement opposite from the first sentence of Hurricane Crimes. And I, of course, had to show a contrast between the first paragraphs as well.

This is a duel!

Hurricane Crimes is in the red corner.

Seismic Crimes is in the blue corner.

Which story will come out on top?

Beth was going to die.

At least according to the nervous weatherman on her flickering television screen. An image of what was supposed to be Florida wavered in and out, except it was barely visible beneath the swirling mass of a Category 5 hurricane named Sabrina, which seemed to have a vendetta against the sunshine state. She never once sidled away from Florida but came head-on while gaining strength like a warrior preparing for battle.

The anxious weatherman forecasting Hurricane Sabrina’s arrival was wrong. She didn’t even die at the big, slightly calloused hands of Donovan Goldwyn, as she had thought she would. Accused of killing his brother, Donovan had shown all the signs of being a murderer, but she later realized he wasn’t a killer despite his suspicious mannerisms. Together, they had taken down one of the police officers responsible for killing Donovan’s brother, but one of the killers got away. 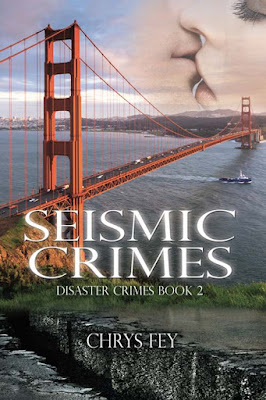 An Internal Affairs Investigator was murdered and his brother, Donovan Goldwyn, was framed. Now Donovan is desperate to prove his innocence. And the one person who can do that is the woman who saved him from a deadly hurricane—Beth Kennedy. From the moment their fates intertwined, passion consumed him. He wants her in his arms. More, he wants her by his side in his darkest moments.

Beth Kennedy may not know everything about Donovan, but she can’t deny what she feels for him. It’s her love for him that pushes her to do whatever she has to do to help him get justice, including putting herself in a criminal’s crosshairs.

When a tip reveals the killer's location, they travel to California, but then an earthquake of catastrophic proportions separates them. As aftershocks roll the land, Beth and Donovan have to endure dangerous conditions while trying to find their way back to one another. Will they reunite and find the killer, or will they lose everything?

a Rafflecopter giveaway
Posted by Gwen Gardner at 12:30 AM