Escalation: The Fight Over Mankind's Destiny

The premise of Stephen Tremp's new book is soooo intriguing. It has everything! Alternate realities, science fiction, and the do-or-die possibility of a dystopian ending. And based on the cover, I'm willing to bet there's some steamy chemistry going on, too.
Check it out: 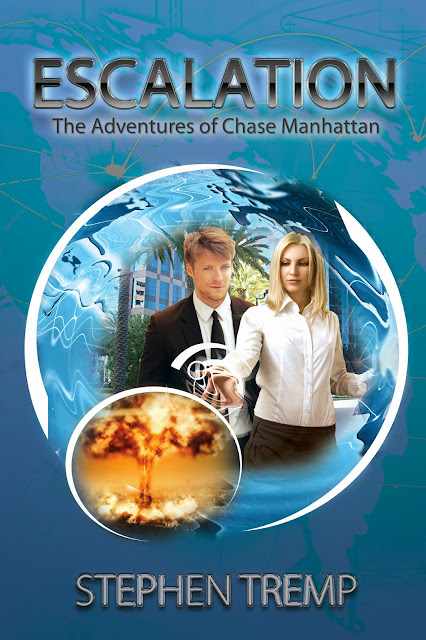 Escalation Synopsis:
“I know not with what weapons World War III will be fought, but World War IV will be fought with sticks and stones” - Albert Einstein
In Escalation, the final installment to Stephen Tremp’s Breakthrough Trilogy, a seemingly innocent discovery in Einstein-Rosen Bridges, or wormholes, becomes a Pandora’s Box—opening doors to other unexpected and unpredictable realities such as parallel universes, time/space travel, and an evil hitchhiker from another dimension.
Chase Manhattan has survived attempts on his life from numerous sources in his effort to destroy the technology. But he is far from safe. Now Chase and his comrades must not only break world renowned physicist Professor Nicholas Fischer out of prison a second time, but also smuggle him across hostile borders in Europe and the Middle East to prevent events threatening to spiral into World War III.
At stake: an end to Western civilization as we know it. The result: an epic clash where science and the supernatural take center stage, vying for mankind’s destiny. The setting is global as the world divides into an East vs. West climactic battle. The action is swift, adrenaline-charged, and non-stop. Unending twists and turns will keep the reader turning pages and wanting more.
Together, Breakthrough, Opening, and Escalation follow the lives of the unlikely participants from innocence to a coming of age through sacrifice, betrayal, passion, lust, unconditional love, and hope. Escalation will appeal to fans of modern-day science fiction, action, and horror.
***
Escalation's synopsis raises so many "what-if" questions. What if we had a WW III? What if other dimensions existed. What if....
Can you think of any other "What Ifs"?