Today is Lazy Fun Monday!
This comic with Dorothy and Alice commiserating about their lives not only gave me a good laugh, but it got me to thinking. The authors really put their characters through the ringer! When making comparisons between the two, I noticed sort of a formulaic similarity. 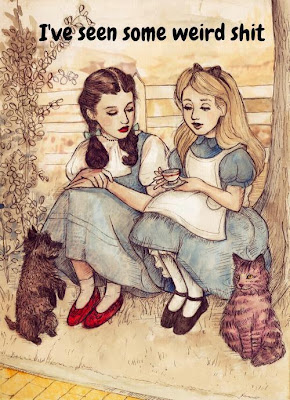 They're both being chased by a wicked persona. They both meet strange, but interesting characters. Both meet talking animals and go on an adventure. Bizarre things happen to them. You're never really certain if they're dreaming or if these things are really happening. They both escape and finally get to go home. Check it out...
Dorothy:
Wicked Witch after her
Munchkins
Talking Lion
Talking Tin Man
Talking Scarecrow
Flying Monkeys
Horse of a different color
Had apples thrown at her by a tree
Oz the Great scared the crap out of her
She killed 2 witches
Alice:
Wicked Queen of Hearts after her
Smoking, Singing Caterpillar (a,e,i,o,uuuu!)
Cheshire Cat
Tweedle Dee and Tweedle Dum
Card Soldiers
Talking Rabbit
Mad Hatter
Shrunk, then grew out of proportion
Fell down a rabbit hole
Almost drowned in her own tears
I was just thinking that maybe the stuff I think up isn't so off-the-wall after all.
What do you think?
Who saw the weirdest shtuff, Dorothy or Alice?
Do you use formulas in your writing?

Email ThisBlogThis!Share to TwitterShare to FacebookShare to Pinterest
Labels: Dorothy vs Alice, Fun (aka Lazy) Monday