Guess who has a new book coming out?
Bonnie Rae!
Check out this cover and blurb. Doesn't it just exude excitement and adventure? 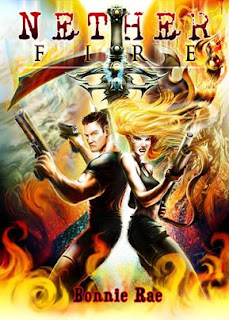 After being gravely wounded by her little sister, Ava awakes in Arcadia and the City of Angels isn't so welcoming. She is, after all, Lucifer's Angel of Death and she has only one mission. Open the portal between Arcadia and the Nether World allowing Lucifer's army to penetrate the gilded walls of Heaven. Too bad Arcadia has other plans. Before she has the chance to set Lucifer's plot in motion, they send her and Devon hurtling back to Earth. Now, stripped of their powers, the two must put aside their differences and race against time to save Christa's soul and the shattered remains of Mankind. If they fail, darkness will rule their two worlds and obliterate what is left of Earth. If they succeed, Ava could still lose everything.

Including herself.
Posted by Gwen Gardner at 3:00 AM