Realms Trial: Who Be Harboring Ghosties? 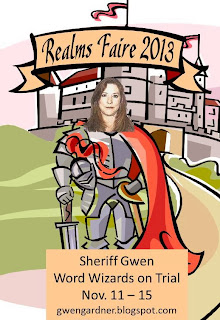 *Sheriff Gwen rolls out scroll to read the charge* Upon a recent tip from a certain ghostie, erm, I mean steadfast citizen of this most worthy realmdom, I did receive reliable information about David Powers King, late of Mountain West, now of Blogtown in the land of Realms, and most recently a guest of ye olde Realms Stockade Brigade, courtesy of her highness, Mistress Mary Pax, and overseen by me, Gwen, the honorable Sheriff of Realms. *runs out of breath and sucks in a lungful of air before continuing*


Twas upon the first day (or thereabouts) in the month of November, in the year of our Lord, two thousand and thirteen, said prisoner, *sheriff motions toward David struggling in the stocks* Sir DPK, did in fact harbor, or cause the harbor of a spirit child. *Said child stands grinning next to a Christmas tree and winks at Sheriff Gwen before thumbing his nose at David*. Maverick, the spirit child, twas meant to be safe in Heaven at Christmastime, but instead, was forced betwixt the pages of The Spirit of Christmas, a very special anthology, indeed, and tucked neatly into the story called Brother Christmas, by none other than David. Powers. King.


*hisses from the crowd*


Here is my evidence:


“I bolted from my spot on the floor, ran past the TV room, and headed down the stairs to my quiet, basement bedroom—my own little man cave. I switched the lights on and plopped face-first onto my bed, breathing shallowly. Finally, the display of sob stories was over. A few seconds later, the door shut on its own. A boy stood in my room. He looked about my age, and he was an exact match of the boy in that picture upstairs.


I nodded at Maverick, the ghost of my brother.” 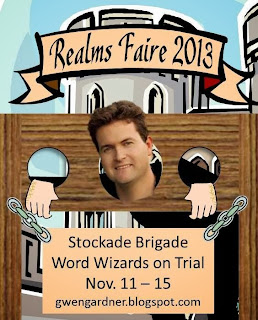 Thou hast me all wrong, Gwen Milady! Indeed, I kept the ghost of young Maverick from the other side for a time, but when struggling as I did for a story set around Christmas, a story I both volunteered to write for a worthy cause and had no idea what it would be about, this dead lad graced mine idea bank and I had to include him. By all means, if it will but help my defense, I sent him on his merry afterlife upon its conclusion. What discomforts he endured I pray shall be forgiven by my attempt to include a story young readers would enjoy in this yuletide anthology, an anthology solely dedicated to The Office of Letters of Light, along with all monies collected through sales and donations, by which they normally operate. Now, if thou would be so kind as to let me out of this stockade and have my charges dropped and good name restored, I could lend thee a copy—at no charge …?


No charge, says ye?
Mayhaps we can strike a deal…what say the commenters, eh?
Posted by Gwen Gardner at 12:01 AM