We're winding down at the Buccaneer Blogfest hosted by Sharon Bayliss and Courtney Young.

Today's task was to do a book review or recommendation.

So today, I'm going to do a couple of shout-outs to some awesome blogsome buddies. 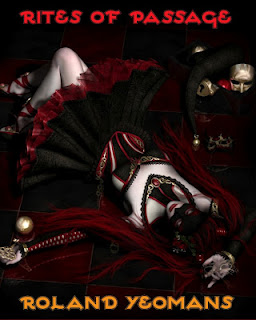 First, Roland Yeomans book, Rites of Passage, is FREE today over on Amazon!

Captain Samuel McCord is such a man. His nature is that of a poet and a philospher. His family dying in a Comanche raid right before his eyes changed all that.


Violence and death has stalked him since that day. Becoming blood brother to a not fully human Apache shaman changed McCord further. He sees around the corner in reality.


By 1853, he has become a pariah among the Texas Rangers, assigned certain death assignments. Traveling the world, McCord saves Princess Victoria's life, sets Napoleon III on his throne, and fights against both sides in the Chinese Opium War. Every crown prince of Europe and the Orient has set a bounty on his life.


McCord could care less. Someone has murdered the young girl he raised from a tiny baby. The murderer took the girl's face to wear as a mask. She was last seen in the company of someone only known as the Gray Man.

If you know Roland, then you know how fun and exciting his books are. I haven't read this one yet, but it's waiting inside my Kindle.

And did I mention it's FREE today over on Amazon?! 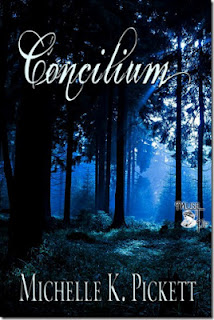 Michelle K. Pickett's book, Concilium, was released today! Michelle has had the count-down widget in her sidebar it seems like forever - I want to say a year?!

Before I go any further, Michelle is going to stop here on her blog tour on August 6th to talk about the MEN of Concilium. If you like men...come back because these guys are rather special.

Here's the back cover blurb:

“A tale of deadly creatures and forbidden romance”


Leslee hit a strange animal with her car. Now she’s marked for death.


It was a simple car accident--the animal didn’t even die--but it drew the attention of the Cruor Imbibo. Driven by their insatiable need to feed, the secret society of Imbibo has devoured the dregs of civilization for centuries.


Afraid Leslee will expose them, and put an end to their meal ticket, the Imbibo want her dead.


The Concilium is Leslee's only protection. Guardian of the ancient secret and the protector of humans, the Concilium fights to control the Imbibo and end their feeding frenzy.


Miller works for the Concilium. Keeping Leslee alive is his next assignment.


Now Leslee is on the run, and the only thing between her flesh and the snapping jaws of the Imbibo is Miller. He and Leslee quickly form a bond, but will falling in love make Miller’s job more difficult? Because if he fails, Leslee will be next on the Imbibo menu.


The Cruor Imbibo are coming, and they're coming for Leslee.

You can also read an excerpt over at MuseItUp Publishing.

OR, you can buy Concilium HERE.

This books sounds so exciting to me! It's definitely on my TBR list. If you want to put it on yours, go over to GoodReads.


She wrote her debut novel Concilium in 2010. The sequel, Concilium: The Departure soon followed.

Michelle was born and raised in Michigan. She now resides in a small community outside Houston, Texas with her husband, four children, a 125-pound lap dog and a very grumpy cockatiel.


Michelle loves to hear from her readers! Contact her at


HAPPY, HAPPY FRIDAY, EVERYONE!
HAVE A SAFE AND FUN WEEKEND!