Marketing Paranormal Romance By An Expert!

While I'm off gallivanting with Angela Brown over at Shelly Munro's blog, Christine Rains is going to be hosting right here! I absolutely love when Christine Rains visits my blog. She is a pro at all things paranormal romance. So for her new release, The Dragonslayer, she has written a post especially for me and you. Check it out!

Paranormal romance readers are the most loyal and passionate fans. They attend more conventions, buy more merchandise, and write more fanfiction than fans of any other genre. Without a doubt, these are the fans you want, but that's no easy task.

The basics of marketing apply to all writers. (See five tips on M. Pax's blog today!) To get those amazing fans, you'll have to go that extra mile. Here are five suggestions on how to promote your paranormal romance book:

1. Submit your book to romance review sites like Bitten by Books and Smexy Books. This is a scary prospect. There's no guarantee they'll even review your story, but the advantages to receiving a good review should overpower your fears.

2. Book covers. Readers do judge books based on their covers. Make sure you have a professional cover, of course, but paranormal romance is about mystery, love, and something out of the ordinary. Look at the covers of your favorite books in this genre and see what sells. A supernatural creature, a mysterious symbol, or a hot woman and/or man. Or all of those things. Find out what works best for the tone of your story.

3. There are many book clubs and groups about certain paranormal creatures. You'll easily find many sites dedicated to vampires and werewolves. The Fae, demons, dragons, and even gods. Join the groups, start up discussions, and network.

5. Do something out of the ordinary. Visit haunted houses and post pictures on your blog or host a real life zombie walk. The readers are looking for something extraordinary. Give it to them in your book and through your promotions.

I've said it before, and I'll say it again: never give up. You won't become an undead sensation overnight. Yet if you can nab the attention of these fantastic fans, you'll have a following for life. 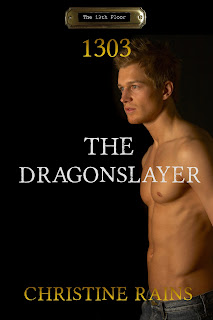 On the rooftop of neighboring building, dragonslayer Xanthus Ehrensvard fires at his target, Governor Whittaker. How he missed the shot, he doesn't know, but fleeing the scene, he picks up an unwanted passenger. Gorgeous reporter Lois King saw Xan's face, and she believes it's the story to make her career. Except he can't let her walk away knowing what he looks like. Xan has to show her the Governor is a bigger threat to the world than he is.

Xan knows dragons never went extinct. They evolved with human society, taking on mortal forms, and slithered their way into positions of great influence and power, just like the Governor. But it's no easy chore proving to someone that dragons still exist, and even more so, they're disguised as famous people. Xan must convince Lois or find another way to silence her. An option, as he gets to know her, he likes less and less.

After all, dragonslayers are no longer celebrated heroes but outlaws. Just as the dragons wish it. But this outlaw must make a plan to slay the dragon or risk its retribution.

“We've been watching the gates for hours. Why don't we just drive up? I'll say I'm with the paper and you're my photographer. They can check me out. It'll be true, and they won't know who you are anyway.” Lois was surrounded by five empty Grande coffee cups, a can of half-eaten Pringles, and a bag of untouched grapes. The fruit was the stake-out snack he'd brought.

“I watched the Governor's estate for months trying to figure out the best way to get in. Security is tight and they always check everyone coming in thoroughly. No one gets in without an invitation, and since you weren't invited . . . .” Xan lifted his night vision binoculars and surveyed the grounds again. Nothing. Not even a squirrel.

“It's the middle of the night. The guard is probably sleeping in the booth.” Lois sighed, squirming in her seat.

“He's not sleeping. In four minutes, he'll come out and check the front gate as he has a cigarette. They run on a rigid schedule.” Xan checked his watch again and nodded once. There was no easy way to do it. He'd have to break in one way or another, and the dragon would know he's coming.

“Well, how about this? The guard comes out for his cigarette and a beautiful woman just happens by. She's a little tipsy and lost, someone stole her purse so she doesn't have her cell. She flashes some leg and asks to use his phone. He opens the gate and POW! You come out of nowhere and you're in.”

“You're not going in.” Xan stated in a hard tone. “I can do the same act. Without flashing some leg.”

Lois snorted as she laughed. “Yeah, right. Your acting skills suck. And besides, who would believe a big guy like you got his wallet stolen? Seriously, I've done stuff like this before. It's a piece of cake.”

She opened the door and was out before he could protest again. Xan growled and pushed his door, stepping out. He was ready to shove her back inside again, but peeked at his watch once more. Time was of the essence.

He rounded the car and laid a hand on the roof as he whispered to her. “You wait in the car. If you see anything going on in the house, call 911.”

“Isn't something supposed to be going on in the house?” Lois folded her arms.

“Yes, but if I'm able to do what I need to do, you won't be able to tell something's going on. If things start to go wrong, it'll get noisy.” To say the least. “My main objective is to find the girl and get her out.”

“And kill Whittaker.” She added with a hard look.

“I will kill him, but when we meet, it'll be messy. I want the girl out of there first.” Though that scenario would be ideal, Xan didn't believe he'd get in without the dragon's notice. It was the Governor's territory after all. The modern security system would be enough to deter anyone, but a dragon didn't need the technology. He would know when someone entered his lair.

“Okay. Alyssa first. And yes,” Lois groaned. “Once you bring the girl out, I'll take her to the police. Don't stop for anything. Alert the media too just in case the police are in Whittaker's pocket.”

Xan breathed out, forcing his overly tense muscles to relax. This just might work. The odds were stacked against him, but if he could manage to get in without sounding an alarm, he might be able to save the girl.

“Thank you.” He wanted to stuff Lois back in the car. Every bit of him screamed to keep her safe. This was no place to make a scene, though.

Lois grabbed him by the collar of his fireproof black jacket and yanked him to her. Her mouth mashed against his. Supple and hard, hot and desperate. There was a hint of caramel from her coffee on her lips to add a bit of sweetness to a kiss that was anything but. An electric tingling raced from his ears to his toes, and a rush of adrenaline that had nothing to do with the mission ahead.

He didn't realize he was kissing her back until she pulled away. Lois made a small sound, something between pleasure and frustration.

“Good. Now I'm flushed. I look much more drunk. It's been four minutes.” She ran her hands through her hair, but it only looked more tussled. She hitched up her skirt a few inches. Her long legs pale and gorgeous in the moonlight. “Good luck.”

Lois winked at him and wobbled down the sidewalk before he could gain enough sense to grab her. She crossed the road to pass the gate of Whittaker's estate and stumbled once. Not in front of the gate, but near it. Enough to make some noise so the guard came to the gate to peer out. He stood watching her as she walked toward him.

Damn tricky woman. There was no way he could stop her now without ruining everything. Fury coursed through him, but also a frustrating sense of admiration.

AUTHOR BIO
Christine Rains is a writer, blogger, and geek mom. She has four degrees which help nothing with motherhood, but make her a great Jeopardy player. When she's not writing or reading, she is having adventures with her son or watching cheesy movies on Syfy Channel. She's a member of S.C.I.F.I. The 13th Floor series is her first self-published series. She has four novellas and eighteen short stories published.