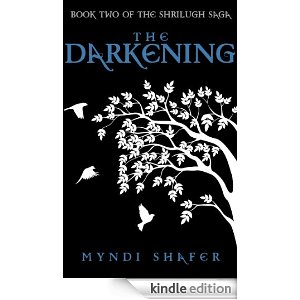 I'm pleased as punch to help Myndi Shafer announce the release of her new book, The Darkening. Even the name gives me the shivers! So here we go...


The Darkening
Book Description
As Aydan Fulbert settles into her new life in a new world, she realizes a few things. She’s healing from losing Brig. She’s coming to terms with her new home. And she’s lonely.

Rein Torvald’s return from his long absence helps alleviate her loneliness, but a darkness comes with him. Unsettling news about her father and the Sovereign has the potential to make her a fugitive all over again - from his world and hers.

Will Aydan allow her heart to be taken places she’s never been brave enough to go? Or will the threat of danger - of the Sovereign’s rage, and her father’s vengeful grudge, send her running?

What was the inspiration behind The Darkening?


When I first wrote this story, Shrilugh and The Darkening were all one book, told solely from Aydan’s POV. When I changed the POV, the story really exploded, and needed to be divided into more than one book. Which is why the first book of the Saga ended rather abruptly, and why, if you read these two back-to-back, they’ll feel a bit like one piece of work.

So, really, the inspiration for The Darkening came from the same place as my inspiration for Shrilugh: an old silo on the farm where I was raised. There’s a ladder that extends up past the top of it that looks kind-of like a door, and I’ve always, always wondered where that door would lead. When I began writing Shrilugh that was my goal - to find out what kind of world was beyond that door.

How did you decide to write fantasy?


It wasn’t ever a conscious decision. In fact, when I began writing, I didn’t know I was writing fantasy. I didn’t know there were genres like that. I mean, I liked reading (okay, loved reading), but I never paid attention to genres. I’d just read whatever I could get my hands on. I began writing with that same attitude, and the story just kind-of went where the story went.

I don’t think I’ll ever be a writer that sticks to a strict genre. I’ve got a couple new stories brewing in my head - one that’s a little dystopian (hmmm, is there such thing as a little dystopian?), and one that’s a sort-of rom-com with weird fantastical elements (the world around the protag shifts randomly into a pirate’s world). Mostly I think I’ll just write whatever sounds like fun at the time.

What’s one thing about you that will surprise readers most?


Oh my gosh, this is a silly question. I have the most tame, Beaver-Cleaver-type life you could imagine. I’m probably the least surprising person in the world. Well, okay, there’s this - I really enjoy folding laundry. I love seeing the tidy piles build up, and thinking about my kiddos and how they’ve grown, and the smell of clean laundry. It’s soothing.

*heavy sigh* I just re-read that and realized how lame I sound. I wish I could have had something way cooler like, “Oh, I go parachuting,” or “Big game hunting in Zimbabwe is totally my thing”. But nope. I’ve chosen to stun you all with laundry.


Couple different things. I’ll be working on the third book in the Shrilugh Saga. Right now its working title is FRUITION, and I’m expecting to see its release in a year or so. I’m also working on a new series whose working title is called SALT MINE. It’s about a girl who has chosen to be mute, a government that’s after her secret, a dog that’s been ‘progammed’ to protect her, and a guy hell-bent on keeping his promise to her dead brother.

Where can readers find you?

I hang out on Facebook here: Myndi Shafer Stories

And my website/blog is http://www.myndishafer.wordpress.com/

Myndi Shafer is author of the best-selling book, Shrilugh. Currently she makes her home in Kansas with her husband and four children. Her second book, The Darkening, releases in February 2013.

The Darkening can be found on Amazon.

New comments are not allowed.