Selkies are What? They Do What? 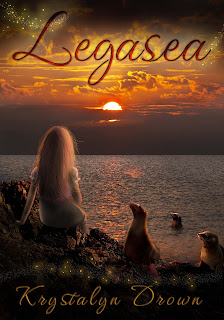 I first learned about Selkies when I took an Irish history class in college. The Irish are born story tellers! And of course their history and myths are very compelling. So when Krystalyn agreed to write about Selkies on my blog, I was thrilled.

When I first started showing Legasea to beta readers, I was surprised that most of them, prior to reading the novel, did not know what a selkie was. I was introduced to the legends by my mother, who showed me the movie, The Secret of Roan Inish. From there, I combed the Internet for any information I could find about them.


A selkie is a seal that can shed his or her skin and transform into a human, and while I took liberties with some of the "rules," I still based my selkies off of the Irish and Scottish legends.

There are many stories where a human male steals and hides a female's skin, then forces her to become his wife. The tales always end in heartache with the woman finding her skin, sometimes many years later, and returning to the sea. Often, she takes their children with her and drowns her husband. While the selkies in my novel aren't quite as cruel, I managed to work a version of that into my story.

Another legend tells that a woman must cry seven tears into the sea in order to summon a selkie male. That makes an appearance in Legasea as well.

In addition to pulling from the legends, I took inspiration from The Secret of Roan Inish. My characters' lifestyle, heritage, and a couple of the names are influenced by that movie.


To read more about selkie legends and origins, check out this site: http://www.orkneyjar.com/folklore/selkiefolk/index.html

When sixteen-year-old Aileen Shay sees a dead girl floating in the bay during a midnight yacht party, she never imagines Jamie Flannigan, her new boyfriend, may be involved. The only thing she knows about Jamie is that he personifies the one thing she has been drawn to her entire life – the ocean. But as she grows closer to him, she realizes he knows more about the murder than he's telling. When another girl is attacked, and Jamie refuses to answer her questions, Aileen searches for answers on her own.

Aileen learns that Jamie's family belongs more to myths and legends than they do in the real world. They are selkies, and after the Flannigans threaten her family, Aileen suspects they are responsible for both attacks.

But they aren't the only ones in her small fishing town who can keep a secret.

As Aileen uncovers the truth about the murder, the selkies, and her own family, she learns why her soul is bonded to the sea. But with that revelation comes a choice – to permanently sever her connection with the water, which comes at a painful cost, or embrace a legacy that just might get her killed.


Enter here for a chance to win a Legasea prize pack:

New comments are not allowed.