I absolutely love Shrewsbury, having been there somewhere around 1990 on my first trip to Europe. When I sat down to write my first novel, Shrewsbury came back to me. The old pubs, the half-timbered buildings, the narrow ginnels and cobblestoned streets; all fit the atmosphere I was looking for when my sixteen-year-old American protagonist found herself orphaned with the sudden necessity for an English uncle willing to take her in. And what better place than a modern day medieval village teeming with ghosts to "show off" her special abilities?

And so I look at photographs of Shrewsbury to bring it all back and to inspire atmosphere as I write, and to disappear into the world I create... 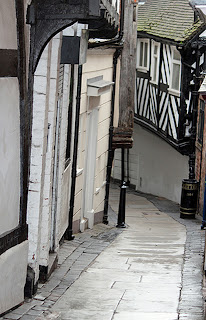 Grope Lane, Shrewsbury.
(Aptly named way back in the day because groping was so prevalent).
This is the ginnel that Indigo was chased down by the dark shadow, right before she barreled into Badger. 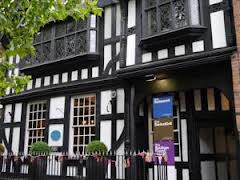 The Blind Badger in the market square, next to market hall. Picture a pub sign hanging out front. 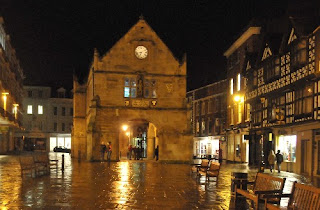 The Market Hall in the Market Square (Shrewsbury/Sabrina Shores).
This is where Indigo met Cappy at a market stall. 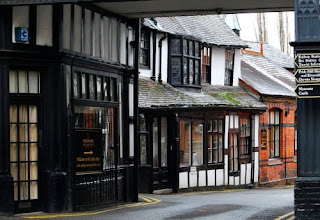 This is where Indigo and Simon discovered they were being followed.
We walked along the damp, cobblestoned road, taking cover from the weather by sticking as close to the buildings as possible. The jettied half-timber beams leaned in to cast ancient shadows over us. Muted light shone from closed curtains, silhouettes passed back and forth behind them like shadow puppets. We didn’t have anything like this in the States. There was even a castle. The ancient architecture was a marvel, the same buildings standing upright in the same spot for hundreds of years. Nearly upright, anyway, because many leaned. I guessed that the sameness, or lack of change, must have been what kept so much of the spirit world tied there. 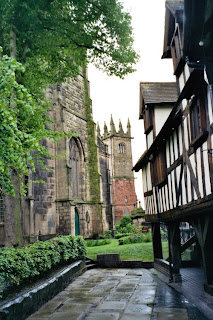 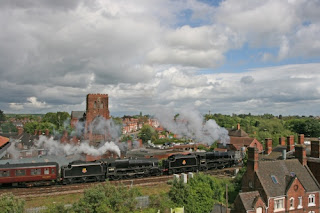 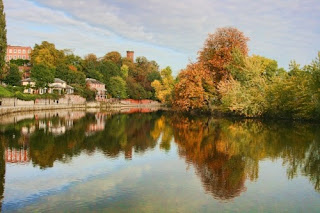 The park.
What do you use to inspire your writing?
Is your setting based on a real location or made up?
Posted by Gwen Gardner at 3:00 AM